The Founder of Aikido.

Morihei Ueshiba was born in the southern seaside town of Tanabe and from an early age was quite religious, as well as a serious student of both science and various martial arts.

The Omoto Kyo religion influenced much of his thinking in relation to humanity and to martial arts. His lectures while teaching were often confusing for his uchi deshi who simply didn’t understand him. Many today are still struggling to unravel the meanings he expressed and to varying degrees this has influenced the way they see and teach Aikido.

His experience through the Chinese Japanese conflicts and the beginnings of the Japanese influence in the 2nd world war led him to believe that true victory was not the defeat of an enemy but more the resolution of conflict within oneself. The defeat of Japan convinced him there had to be another way, a way of Harmony, and Love, not one of hatred and conflict, and as a result Aikido as we know it today was created and began to evolve. Certainly it had antecedents in Aikijutsu, Jujutsu, Kenjutsu and other battlefield arts, and elements of these can be found within Aikido, but until O-Sensei created Aikido there was nothing else like it before that promoted love and harmony.

Aikido is a true Budo in that the martial training is a means to self improvement and spiritual growth, not in the sense of being religious but rather in the expansion and improvement of the individual’s personality and the way in which others are regarded.

Kisshomaru Ueshiba was the only surviving son of Morihei Ueshiba and became Doshu (Nidai Doshu or 2nd Doshu) after the death of his father in 1969. He trained under the guidance of his father and managed the dojo in Tokyo through the wartime period and afterwards. He was responsible for the spread of Aikido around Japan and ever increasing popularisation of Aikido around the world.

He founded the Zaidan Hojin Aikikai which is government recognized non profit body and is now the centre of World Aikido at Hombu Dojo. He co-ordinated the sending of Japanese Shihan overseas which was instrumental in forming the seeds for the many international Aikido organisations in nations around the world today. His many and varied publications over the years all contributed to the expansion, development, and general understanding of Aikido. The high educational and technical standards he set has generated enormous respect and appreciation for both himself and the art his father founded. He died in 1999 having successfully over the years transformed Aikido into an international movement.

Please note: There is so much written about Morihei Ueshiba O-Sensei, Kisshomaru Ueshiba, overseas Shihan and Aikido in many books and websites that there is no need to repeat it here. Further information can be found initially by following some of the links provided with this website.

Aikido in Australia effectively began when Seiichi Sugano Shihan arrived here in 1965 with written authority from the Aikido Founder Morihei Ueshiba, O-Sensei to teach and be responsible for Aikido in Australia. He was one of O-Sensei’s uchi deshi and as such his aikido was directly from the source itself. We were fortunate so have such direct transmission available to us.

Sugano Shihan quickly gathered a dedicated group of students who were extraordinarily keen to receive his teaching. What is truly extraordinary is that many of these students are still training and studying, as well as now teaching, almost fifty years later.

In 1975 Sensei’s students and appointed instructors established Aiki-Kai Australia to assist him as well as to protect and develop Aikido in Australia. In 1975 Aiki-Kai Australia was certified as an Official Representative organisation by the Aikido World Headquarters (Hombu) in Japan becoming also at that time a member of the International Aikido Federation. 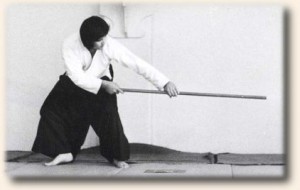 Aiki-Kai Australia has many dojos now around the country in every state and territory.

When Graham Morris Sensei arrived on the Gold Coast from England there was no Aikido being taught in Queensland. At that time (over 30 years ago) being a member of the British Aiki Kai and Fukushidoin, he felt in order to continue practising in his new home he needed to start a dojo. Visiting Melbourne for summer training he became a member of Aiki-Kai Australia and asked and received permission from Sugano Shihan and Aiki-Kai Australia to establish a dojo to promote and teach Aikido in Queensland. Morris Sensei was appointed to the position of provisional Area Representative for Queensland in 1985, and this position was later confirmed officially in 1988.

The Aikido Centre was established by Morris Sensei and for many years was located in Burleigh West. From its initial small beginnings the Queensland Aiki Kai Inc grew to encompass dojos in Warwick, Samford, Toowoomba and Cairns. Each of these dojos is run independently but all remain affiliated with the organization originally started by Morris Sensei.

Times change and the West Burleigh dojo no longer exists, the building having been demolished and the site redeveloped into a larger commercial centre. Activities for Gold Coast Aikido have moved to the Mudgeeraba community Centre in Railway Street.