I saw a book on Aikido in the late 80s and I wanted to find out what it was, as it was very different from the martial arts that I was familiar with. I began Aikido practice in 1991 in Frankston (Victoria), the classes were very tough, we never had many students because of this. I remember the first time I went to summer school and trained under Sugano Sensei, I was amazed at how he moved and was equally impressed with his weapons practice.

In 1996 I moved to the Gold Coast to practice at the Burleigh Heads dojo, the dojo was a very busy place and there were many Dan grades, the practice was intense and to a very high standard.

Aikido, like anything worth learning, takes time and effort to learn. Manner and attitude play a very important part. New students of Aikido should practice diligently, there is so much to learn, and my advice is to enjoy the journey. Be the first to arrive and the last one to leave and always do your best.

Aikido is a Way

There is commitment and there is obligation
Do not abuse or misuse the art of Aikido
Study carefully, honestly, and humbly
Respect your seniors
Take care of your juniors
Seiichi Sugano 8th Dan 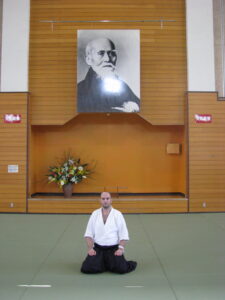 Allan Ashard at the IAF Congress in Tanabe 2008

I commenced my training at the Burleigh Heads dojo in 1997 and I have trained consistently ever since.

The Burleigh Heads dojo was a fantastic place to train, well known for its hard style of Aikido, and I was lucky to have had the opportunity to share that experience with a great group of people during my time there. When I relocated to Melbourne, I established the Berwick Dojo for Aikikai (Australia) and attended both the Clifton Hill and Christmas Hills dojos on a regular basis. During this time, I was introduced to advanced concepts that re-shaped my understanding of Aikido by choosing to focus on principles instead of individual techniques. Once again, I had an opportunity to further my study with a fantastic group of like-minded training partners, this was certainly something that I took full advantage of until my return to Queensland.

Aikido has been a gift that has permeated every aspect of my life. It has taught me humility, consideration, perseverance, and self-reflection. I owe a lot to Aikido. It’s a privilege to train, and I will continue to study and share my experience to the best of my capacity.

I started my Aikido journey with Russell Cosby Sensei in 2009, not long after the dojo in Mudgeeraba had opened. Initially, I was taking my kids to the children’s classes run by David Robinson Sensei. Being a spectator wasn’t going to work for me and I looked to join in with the seniors’ classes that followed. Since then, both of my boys have moved on, but I have continued to train.

When I was young, I was always drawn to Martial Arts and had studied both South Shaolin Kung-fu and Vovinam (Vietnamese martial art). When I came across Aikido, it was certainly quite different from what I had studied in the past and I was drawn to the smooth movements and impressed by the seemingly ‘simple’ body movements within the techniques.

When I commenced training, I soon realised that it is difficult to learn and quite complicated. Consistent training and a good attitude are an absolute requirement if you wish to progress in your training. My advice is to be aware that plateaus will occur, but if you consistently show up to train, you may be surprised at what you will achieve.